Grim it may be, but the government’s approach to getting dangerous Grenfell-style cladding replaced on tower blocks certainly appears consistent. Credit: Private Eye, Housing News

Register now for the free webinar

LEASE is hosting a free webinar to help you make an informed contribution to the Government’s consultation  ‘Strengthening consumer redress in the housing market’.

The webinar will be presented by our experienced advisers, Nicholas Kissen and Kavita Bharti.

The Government is concerned that the current landscape is confusing for consumers both in terms of the number of schemes, differences in practices, and gaps where consumers have no recourse to redress. As a consequence the consultation explores and questions:

improving ‘in–house’ complaint processes, to ensure that issues get resolved as quickly as possible;

the practices and functions that should be expected of redress schemes and the powers that they need to do this;

How to fill existing gaps in redress, with a particular focus on private tenants, buyers of new build homes and leaseholders; and

The case for streamlining and improving services for consumers through the creation of a single housing ombudsman service.

Responses to the consultation should be submitted no later than midnight on 16 April 2018. You are encouraged to respond by completing an online survey.

Alternatively you can email your response to the questions in the consultation to – Housingredress@communities.gsi.gov.uk

Written responses should be sent to:

Islington council is consulting on the Site Allocations Direction of Travel Document and is seeking feedback until 26 March 2018.

Over 150 sites have been identified, which could accommodate new housing, workspaces, shops, open spaces, or leisure and community facilities. The council is inviting feedback on the proposed site allocations. Any comments received during the consultation period will be used to inform the drafting of the final version of the document.

You can view the Site Allocations Direction of Travel document via the link: www.islington.gov.uk/consultations.

Hard copies of the draft document are available to view at all Islington libraries.

You can make comments on the draft document:

Please send your comments by midnight on Monday 26 March 2018. 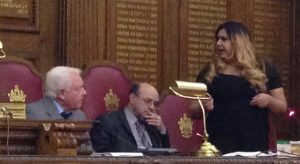 The ILA are looking for a ‘secretary’ to take minutes and distribute them regularly to all the directors and asks for a volunteer to undertake this essential part of the work, to assist with the smooth running of the organisation. If you are interested please log into http://www.ila.org.uk/faqs/contact-form.

If you wish to join or renew your membership please contact our website ww.ila.org.uk where you can obtain the appropriate membership forms.

Please impress upon any other leaseholders that it is in their interest to attend these meetings regularly…..

The case, Mundy v the Sloane Stanley Estate, involved a small flat in Chelsea where the lease had fallen to less than 23 years and the freeholder was seeking £420,000 to agree an extension

Campaigners had hoped that a ruling could slice as much as half off the cost of extending a lease or buying a freehold. But the court found in favour of the Sloane Stanley Estate, in a major victory for owners of freehold land, such as the Duke of Westminster’s Grosvenor Estate.

The challenge had been led by surveyor James Wyatt of Parthenia Valuation, who argued that a system of lease valuation commissioned on behalf of the Duke of Westminster more than 20 years ago was invalid.

Many poorer families could be in danger of having their home repossessed as a state-backed benefit is taken away.

The government has been called on to delay a new “second mortgage” scheme, which replaces a benefit for homeowners on low incomes, after just one in 20 affected households have signed up for it.

From April, the government is axing “support for mortgage interest” (SMI) which helps financially constrained homeowners with their mortgage. It will be replaced with a controversial system where the government offers to loan people the money, which will be repaid later with interest.

However, new figures have shown that just 6,850 households have signed up for the scheme out of the 124,000 currently receiving the SMI benefit, prompting calls for the changeover to be delayed.  more info

In advance of next week’s Housing Scrutiny meeting which will be considering the performance of Partners, please find attached a note submitted by a Partners tenant on the organisation’s resident scrutiny arrangements. This may inform discussions at the meeting. 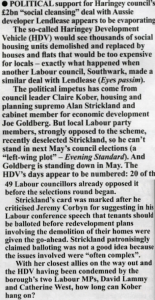 Dr Potter has asked me to forward this onto you all and has kindly suggested that everybody should reply to this by sending in a written submission….. A.S.A.P…. Deadline = Friday, 10 March 2017

Please click on the link below in BLUE to submit your written submissions.

MPs launch inquiry into overview and scrutiny in local government

The Communities and Local Government (CLG) Committee has launched a “long-overdue” inquiry into overview and scrutiny in local government.

The committee said it would “consider whether overview and scrutiny arrangements in England are working effectively and whether local communities are able to contribute to and monitor the work of their councils”.

Written evidence is invited on:

How chairs and members are selected

Whether powers to summon witnesses are adequate

How topics for scrutiny are selected

The support given to the scrutiny function by political leaders and senior officers, including the resources allocated (for example whether there is a designated officer team)

What use is made of specialist external advisers

The effectiveness and importance of local authority scrutiny of external organisations

Examples where scrutiny has worked well and not so well

The deadline for written submissions is Friday 10 March 2017.

Clive Betts MP, chair of the committee, said: “This inquiry is long overdue. Local authority executives have more powers than ever before but there has not been any review about how effectively the current overview and scrutiny arrangements are working since they were introduced in 2000.

“Local authorities have a considerable degree of discretion when it comes to overview and scrutiny. We will examine these arrangements and consider what changes may be needed to ensure decision-makers in councils and local services are better held to account.”

Overview and scrutiny arrangements were introduced by the Local Government Act in 2000 as a counterweight to increasing decision-making powers of Leaders and Cabinets or directly elected mayors.

The committee said that shortcomings had been exposed, however, following a number of high profile cases, including child sexual exploitation in Rotherham, poor care and high mortality rates at Mid Staffordshire NHS Foundation Trust and governance failings in Tower Hamlets.

Guest Speaker: To be advised

Volunteers wanted
The ILA are looking for a ‘secretary’ to take minutes and distribute them regularly to all the directors and asks for a volunteer to undertake this essential part of the work, to assist with the smooth running of the organisation. If you are interested please log into http://www.ila.org.uk/faqs/contact-form.

If you wish to join or renew your membership please contact “Support” section of our website ww.ila.org.uk where you can obtain the appropriate membership forms.